MELBOURNE is full of hidden gems and is home to contain the city’s small bars, cocktail lounges and restaurants – the grooviest and funkiest of which are usually tucked away or hidden in the city’s alleys or atop CBD buildings (believe or not there’s even an igloo room hidden in a groovy Fitzroy pub).

So it was with some sense of satisfaction that I wandered down one particular laneway in Melbourne’s Chinatown and to a place named HuTong (Mandarin for ‘alley’).

HuTong Dumpling Bar has received some hype over the past year for its dumplings – especially its xiao long bao.

I consider myself a bit of a xiao long bao zealot. I tend to survive on these wonderful “soup dumplings” when in Taipei and the only reason I don’t come back looking like one is because I am saved by trudging up and down Taiwan’s beautiful mountain scenery. They are down right comfort food and if prepared properly are delectable and addictive.

I arrived just as HuTong was opening (11.30am) and already the place was starting to fill up. Without a booking i was ushered upstairs. This narrow restaurant is over three levels, downstairs one can watch the dumpling makers roll, fill and form their dumplings (a visual concept the famous Taipei restaurant, Din Tai Fung, has exported), the second level is another dining level while on the third floor are private dining rooms. The interior combines earthy tones and exposed brick walls with traditional Chinese dark wooden tables. There are photographs of Chinese street scenes on the walls. I assume that the decor is meant to resemble an old, back-alley teahouse.

The menu isn’t just all dumplings – there is a variety of appetisers or snacks (like squid in salt and pepper or spring onion pancake), and larger meals (such as Szchzuan bean curd with minced pork or double-cooked sliced pork with chilli), but the go are the dumplings and there is a selection of mainly six to choose from.

As I was there for brunch I ordered only two dishes: the xiao long bao and the steamed garlic chive and minced prawn dumplings.

There is a ritual (or an art) to eating xiao long bao as they’re not the kind of dumpling that you put wholly into your mouth as the scorching liquid inside will scald your mouth. So as not to embarrass you in front of your guests when eating xiao long bao (swallowing scolding liquid will always lead to tears), firstly pour some vinegar to the shredded ginger (which will accompany them), and carefully pick up the xiao long bao by the ‘nipple’ with chopsticks without breaking the skin. Then gently dip it into the ginger-infused vinegar sauce and place it on to the spoon. Nibble the side (or nipple if you dare!) of the xiao long bao and suck the soup out. Add more ginger and vinegar or even chilli oil to the dumpling and gobble away. 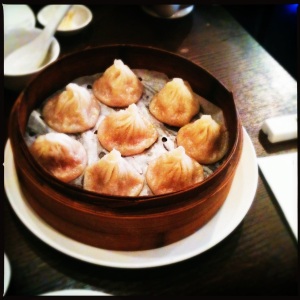 The xiao long bao (8 for $11.80) at HuTong were perfectly formed and finely folded thin pearl-coloured parcels containing a nectar of the Gods. The silky skins were light and thin and filled with a tasty broth exploding into the mouth followed by a not-too-richly seasoned minced pork filling. They were good – better than most but when compared with those from the famous Din Tai Fung (which I consider as the xiao long bao benchmark), lacked a certain wow factor to be considered great.

I also had a bamboo steamer of garlic chive and minced prawn dumplings ($8), four crescent-shaped, translucent and plump dumplings. I think I could have ordered better, the skin was a tad too thick and glutinous and the filling combination seemed a bit uninspiring. Of course, unlike with xiao long bao, you can pop these straight into your mouth.

There seemed to be people in the know as most other tables not only had the xiao long bao but also what turned out to be won tons in hot chili sauce ($8.80). These were beautiful looking golden parcels swimming in a bright red chili sauce. A dish that looked (and smelt), divine.

The service at HuTong seems a bit harried (and without a smile), and a downer is that it charges $3 per head for tea – a bit cheeky considering dumplings are synonymous with tea.

The verdict: The xiao long bao are worth coming for if that is only why you go.