Movies you can munch on 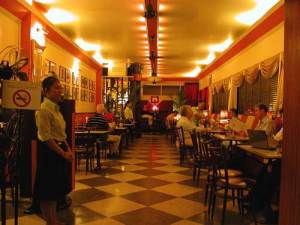 The diner at The Atlanta Hotel in Bangkok

EATEN the dish and now want to see the film devoted to it? Not only do I have a large larder at home I also have, over the years, developed a library of food movies. The inspiration to collect such films (some may say madness), was
encouraged by visits to the Asian art-deco The Atlanta Hotel in Bangkok’s Sukhumvit Soi 2. The hotel’s “diner”
has a top-notch menu featuring not only some of Bangkok’s best culinary delights and Bangkok’s most comprehensive vegetarian menu but also a couple of pages listing some of the world’s top movies devoted to food that can be added to your order for viewing. There’s also a wonderful collection of jazz albums including recordings by His Majesty King Bhumibol Adulyadej of Thailand which are played during lunch from noon. So, sit back and relax with your favourite dish and remote control in hand and take a journey through a smorgasbord of international food cinema with these recommendations (in no particular order but the first two are my favourites).

Big Night (1996): NON-STOP food scenes (with a wonderful soundtrack), Big Night will inspire you to search every Italian cooking book and website to replicate brother’s Primo and Secondo’s ultimate Italian feast which they prepare to try and save their failing 1950s New Jersey restaurant. Primo is the Italian perfectionist and traditionalist – he won’t compromise on his cuisine and wishes to cook glorious dishes and run a ‘real’ Italian restaurant despite every other Italian restaurant is making a fortune serving “spaghetti and meatballs’. Front-of-house-man Secondo plans a magnificent feast for expected guest, the famous singer Louis Prima, and local high society to gain publicity and save the restaurant – the “Big Night”. The film focuses on Primo’s magnificent, and mouth-watering multi-course feast which they put everything into to ensure its success. Not to be missed are the cooking scenes with the Italian dish timpano and watch out during the banquet scene and the subliminal flash of the porchetta! Oh, and if you want a recipe for timpano (and have a whole day to kill) it’s here.

Tampopo (1985): YOU’VE heard of a spaghetti western – well this is a ramen western! This movie is responsible for my fascination with ramen soup. Tampopo is a movie that pays homage to Japan’s favorite working-class delicacy. Ramen-slurping, truck-driving cowboy, Goro, gets together with a band of singing and dancing destitutes (I am not kidding), to help Tampopo save her restaurant. After Goro rescues Tampopo’s young son from being beaten up by a group of school girls he is rewarded with a bowl of very bad ramen. Goro tells Tampopo the truth about her cooking and she asks for his help. Goro and his merry band of bums go about doing just that. The film interweaves between stories about food and the characters in searching for the perfect ramen recipe. The film shows how to eat ramen like a master, how woman should eat pasta without making noise, how to stop an elderly woman from squeezing grocery store items and how to make your partner feel erotic with raw egg or a drunken live prawn. An absolute classic and must see while slurping down an bowl of perfect ramen (but careful not to chock as you laugh while swallowing your soup).

Eat, Drink, Man, Women (1984): DIRECTOR Ang Lee’s story of ageing Taiwanese chef and father, Chu, who struggles with the realisation that he is losing his taste for food while having to also cope with the life problems of his three adult daughters. Unfortunately his daughters are blind to the widower’s needs for love and companionship and the impact that the loss of taste is having on his illustrious career and his life. The movie celebrates Chu’s passion for cooking and how he expresses his love for his daughters by cooking elaborate banquets at their weekly family get togethers (unfortunately they just pick at it). All dishes are prepared from scratch (including the killing of the chook). High-speed knives chopping furiously (and perfectly), as well as elaborate food scenes makes this a must see movie for any foodie.

Bella Martha (Mostly Martha) (2001): ANOTHER food movie with a brilliant soundtrack. Also known as Mostly Martha, this German film was the inspiration for the copy-cat Hollywood flick – No Reservations. The opening scene captures the hot-bloodiness of chefs with Martha stabbing a complaining guest’s table with her knife. Single Martha learns that her sister has died tragically and she now has custody of her 8-year-old niece, Lina. While balancing her cooking and parenting duties a new chef comes onto the scene – the hot-blooded and fiery Italian Mario – to help in the restaurant. What enshews are battles between Martha and Mario and the frustrations of Martha coping to run a successful restaurant as well as be responsible for bringing up Lina. Great food scenes combined with a lively soundtrack and feel-good story
make the movie a winner. By the way, No Reservations doesn’t do Bella Martha any justice (and it really annoys me that the producers blatantly use the title of Anthony Bourdain’s excellent TV series).

Dinner Rush (2000): YOU will never have your back to the entrance of an Italian restaurant again – well, that’s an over exaggeration, but when you dine in New York’s most fashionable restaurant owned by a well-connected bookie (Louis) with his super-star son as chef (Udo), it’s best to leave a tip. The film is set during one night in the life of the restaurant and opens with a long-time friend of Louis’ being killed by two rival bookies known as ‘Black and Blue’ (who are now in his restaurant and would like a piece of it). Meanwhile, Udo wants more control in the business – a traditional Italian restaurant started by his mother that now is New York’s shining star – and his cooking is bringing in the crowds, rave reviews and the money. All his father wants is for his son to cook good traditional Italian meals instead of the fancy and creative dishes that are wooing New York society and has to rely on debt-ridden sous chef Duncan to cook him sausages and peppers. The kitchen scenes are well staged and the movie features the rigours of owning and running a restaurant from the preparing of the dishes, the heated kitchen exchanges, the sensitive waiting staff and the ravings of the restaurant’s key customers – a nasty and important art gallery owner and a powerful restaurant critic. You will have to watch the film to find out the movie’s unexpected twist.

Chocolat (2000): VIANNE Rocher travels to a tranquil French village where she and her daughter Anouk open a small chocolaterie which starts to trade during Lent – much to the wonder and angst of the traditional and conservative villagers. Her chocolates start to have a mysterious effect among the villagers who eat them – a married couple’s passion is reignited and they give comfort to a women who longs to leave her abusive husband. But Vianne’s ‘enchantments’ come to the attention of the local and devout mayor who sees her as immoral and schemes to see her out of the village. The battle between the two comes to
a peak when a band of gypsies camp on the village outskirts and Vianne finds a strong mutual attraction with the head gypsy. Life is about to change in the sleepy village.

: OK, so it’s cartoon but Remy the Rat could show some of the Masterchef contestants a thing or two about cooking. Remy lives in a French country home and, gifted with a keen sense of smell and taste, aspires to be a gourmet chef inspired by France’s recently deceased top chef, Auguste Gusteau. When he is suddenly evicted he ends up underneath Gusteau’s restaurant in Paris, conversing with the ghost of the famous chef. Encouraged by Gusteau, Remy makes his way up to the restaurant’s skylight to watch the staff and there, he observes the bumbling kitchen hand Linguini. When Linguini spills some of the soup Remy comes to the rescue and fixes the soup. From there on Remy controls Linguini and guides him to become an outstanding chef to the point where the two have to work together and impress the infamous food critic Anton Ego. Can the ‘little chef” live up to Gusteau’s memory?

Estômago (2007): RAIMUNDO Nonato is a bum who arrives outside of a small bar owned by Zulmiro where he learns how to cook bar snacks in return for food and board. He falls in love with prostitute Iria who can’t get enough of his cooking. His talents are spotted by Gioavanni, the owner and chef of the upmarket Boccaccino up the street and Raimundo is wooed to work there where he refines his techniques and learns that food isn’t just fried croquettes and steak. In a turn of events (which is revealed at the end of the movie), Raimundo ends up in prison and cooks to survive – turning meagre foodstuffs into culinery masterpieces for the prisoners and their boss – Bujiù and slowly gets promoted up the prison hierarchy (even with the nickname ‘Rosemary”). The film runs two parallel stories where Raimundo eventually learns that food equals power.

Vatel (2000): THIS is the story of the final days of François Vatel (possibly the world’s first professional event coordinator and caterer) and the three-day, 2000-guest gastronomic event he must cater for – an event hosted by Louis de Bourbon, Prince of Condé, for Louis XIV at Château de Chantilly in 1671. It was on this occasion that Vatel invented the famous Chantilly cream. Prince of Condé is trying to get a commission as a General and believes that such an event will impress Louis XIV. If you ignore the scenes of Vatel chasing after the Prince’s mistress, the movie highlights the planning and coordination of this extravagant and elaborate event. As the story goes, Vatel is expecting a large order of fish but when only a few baskets arrived, Vatal became so distraught that he would not be able to feed Louis XIV and literally falls on his sword.

Julie & Julia (2009): AH, the food bloggers’ movie. This is the true story of frustrated author Julie Powell who escapes the rigours, pressures and anxiety of her job answering calls from the public about the controversial plans to redevelop the World Trade site after the September 11 attacks by blogging. Called the Julie/Julia Project, her food blog back in 2002 detailed her attempts to cook every recipe in Julia Child’s 1961 cookbook: Mastering the Art of French Cooking – that’s 524 recipes over 365 days. Interwoven into the movie are glimpses of Julia Child’s time in Paris in the 1950s (it was here that Julia decides to leave her job to become a food author and presenter – simply because she can’t find any French cookbooks in English) where she learns the art of French cooking (an indulgence tolerated by her patient husband), and makes the decision to embark on a massive project (not unlike Julie’s) – to write a definitive English language book on French cookery. The movie highlights the similarities in the challenges that both Julie and Julia experienced in their gastronomic obsessions (the most interesting being the flashbacks to Julia Child’s life). And, if you want to read the original New York Times article on Julie Powell’s blog that made her famous, click here and the original Julie/Julia Project blog here (tip: navigate backwards via the calendar on her blog).

Editor’s note: So, where’s Delicatessen; The Cook, the Thief, His Wife, Her Lover; La Grande Bouffe? Well, when I become The Hungry Cannibal, I’ll add them (and Soylent Green)!

11 Responses to Movies you can munch on