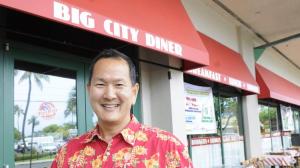 Ohana means family in the Hawaiian language but just as aloha can be a greeting or an expression of love and well-being, ohana is a word that has a deeper meaning than just “family”. It’s a feeling, it’s a philosophy. Your ohana aren’t just your immediate family it can be extended “family” – your friends, your community, your clan. If you were a marine or a brother in arms you never leave your ohana. A simple analogy is your ohana are the people that you do something for without question. It’s love, it’s respect, it’s unconditional.

That’s pretty deep to lead into a review on a suburban Honolulu diner but when you dine at Big City you are part of owner Lane Muraoka’s ohana.

Lane started Big City in 1998 and he practices the ohana philosophy without question – Big City Diner puts on special discounts for those who serve the country and the State (whether military or as first responders), with its Thursday “Thank a Trooper Day” and he is an avid supporter and contributor to local community sports teams and causes. If you don’t qualify for the Thursday discount don’t worry – Big City Diner has daily specials where customers can get 50 per cent off pupus (these are small appetisers/bar food) to drinks and weekly specials and daily meals. And don’t be surprised if you run into Lane at Ward (or any of Big City Diner’s six restaurants on Oahu), serving and cleaning. He is part of the team and committed to ensuring customers are looked after and appreciated.

Big City Diner (BCD) is decked out like something reminiscent of Happy Days with its booths, chequered black and white floor, chrome and neon, open kitchen and TVs (which are proudly tuned to University of Hawaii sports when teams are playing). But even though it may have a traditional old school / old town American diner feel, unlike the traditional State-side diners, Big City’s menu is a showcase of Island food and in Hawai’i that means you can get everything from Hawaiian to Korean, Chinese, Portuguese, Japanese and American (or twists on dishes of those cultures). Even Anthony Bourdain acknowledges that Hawai’i easily beats Singapore for ethnic food diversity and with such diversity to also get a huge menu (there would be by my guess over 100 items available from breakfast to late night).

BCD is also a great place to watch local sport or a big game. I made a call from Sydney (Australia) to make a booking at BCD at the Ward Center to watch the College Football National Championship back in 2014 the day I found out that the University of Oregon gained a place (as the whole of Ohau would be stopping work to watch their favourite son Marcus Mariota start as quarterback for the Ducks in the game). Booking received and not forgotten. I even took my mother to Big City Diner for a significant birthday late last year knowing that Lane, Manager George and Chef Jenny would make it a special experience (and Lane was there to welcome us back and ensure it was a great lunch).

Breakfasts, lunch and dinner servings are large and as it is a place for ohana BCD is a great place to take the keiki (children) as there is a great range of children’s meals available which will temp even the fussiest of eaters.

So, with a menu so diverse what are the must haves?

When I went back to Oahu in January 2015 I popped in with the keiki (DJ Hoot and Gob) for an early lunch at Big City Diner at Ward Centre just before we were to pop next door to watch a movie at the large Megaplex (it was Mahalo Tuesday so cheap tickets and $2 popcorn and dogs were on offer).

A good lunch combination  was Grandma’s Incredible Kimchee Fried Rice and a li hing samurai lemonade. From $9.99 you get a very large plate of fluffy rice with all those great fried rice bits (like onion and meat), that has been wok fried with the addition of BCD’s homemade kim chee. It’s a dish from Lane’s Korean heritage and may be out of place in a typical “American” diner but as this is Hawaii with its many cultures influencing what you eat on the Islands it certainly isn’t out of place in a “Hawaiian-American” diner. The kids can chose from burgers, dogs, sandwiches, meatloaf, etc (all for $5.99) with a juice included. Both girls liked their dogs and were quite satisfied (they also had to politely refuse the offer of having a sundae).

But the best way to sample some of the key dishes and explore the menu is by grabbing your ohana and sharing some plates and taking your time watching a game which I did during the 2014 National Championship with my father Pierre and my mate Harry Haloumi (Lane even had a game special with half-priced pupus and a very long “happy hour” on Miller Lite during the duration of the game so it was a good incentive for us to graze through some dishes for the three hours we were there to support the Ducks). Great share dishes on the day included baby back ribs (a must), chicken wings and the NY steak which is sliced and tossed with pulehu spices and topped with green onion and roasted sesame seeds (and we even were just able to fit in a burger).

Every American diner should have a house burger and BCD has some great ones: there’s the Grandma’s Famous Kimchee burger ($11.99), the Paniolo burger ($12.99) or my favourite –  Sistah’s Patty Melt ($11.99): a classic chop house burger with Thousand Island dressing on thick “Texas toast” served with caramelised onions, sautéed mushrooms and melted Jack cheese.   Again, wash one of these down with BCD’s Original Samurai Li Hing lemonades and you’ll leave beaming (however Harry Haloumi prefers the shakes at BCD which he believes are better than the ones served at Jack Rabbit Slim’s – if you know what I mean).

Must have: baby back ribs with guava BBQ sauce.

But if there is one “must have” dish – the one that keeps me coming back and salivating whenever I think of it, it is BCD’s baby back ribs with guava barbecue sauce. A huge rack of juicy and tender pork ribs that have been slow roasted for five hours which have been cooked and dressed with a tangy and spicy guava-driven sauce. The meat just falls off the bone and it is just exquisite. How I wish I could replicate them back home in Oz.

BCD is the place for ohana (just make sure they bring big appetites).

The verdict:  BCD’s menu is a showcase of many of Hawaii’s diverse cultural influences with dishes using local produce sourced from all over the islands and the meals are continually consistent in quality and generosity.