Posted on December 5, 2018 by The Hungry Bon Vivant 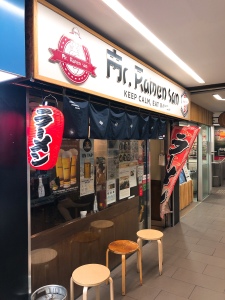 OH how I wish Mr Ramen San was in Sydney! If it was I would probably have lunch every day at this superb ramen-ya and as a consequence have the physic of a sumo wrestler in a matter of weeks.

Mr Ramen San is located in Melbourne’s Chinatown Mid City complex arcade that runs between Bourke and Little Bourke streets just up from Swanston Street. Upon entering Mr Ramen San you would be forgiven if you thought you had just entered a local Japanese ramen-ya with its two bars, small tables, quirky Japanense anime and movie  posters adoring the walls and a hearty and cheerful Irasshaimase! from the staff.

Mr Ramen San specialises in Kyushu style ramen – the ramen that originated in southern Japan in Hakata which has devotees around the world because of its flavoursome and milky, pork-bone “tonkotsu” broth and thin noodles.

I’m also going to make a big call about Melbourne’s Mr Ramen San – not only does it serve one of the best tonkotsu ramen bowls in the country but has the best tsukemen in the world. Yes, that’s a huge statement to make but having gone out of my way to eat tsukemen recently at two of Tokyo’s renowned tsukemen ramen-ya I am confident that  ramen zealots will agree with me.

So, who is the person behind Mr Ramen San? It’s head chef Roystan-san a wonderfully cheery perfectionist who goes by the ethos of “keep calm and eat ramen”. So much of a perfectionist he makes his noodles fresh daily on site. 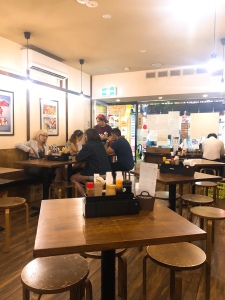 Mr Ramen San is a “build your own” ramen bowl ramen-ya – that means you order the type of topping and pair with a style of soup. For example you can combine any one of the toppings:  charsu pork;  teriyaki beef; chicken; seafood or vegetarian with a soup style: tonkotsu; black tonkotsu; shoyu;  miso; spicy tonkotsu or spicy miso. If you want to experience the best tonkotsu possibly in Australia then Mr Ramen San’s charsu with tonkotsu is the way to go.

For summer there is also the renowned tsukemen (more about that dish later)! A bonus is that with the ramen you can order (for free), what is known as kaedama – extra noodles – if you have any soup left (which is true to the tradition of serving Hakata ramen).

BYO is welcomed but it’s not necessary as Mr Ramen San has draft Sapporo on tap (at $6) and a range of sake – not your high-range stuff but sake of good stature and styles to keep a Tokyo salaryman content. 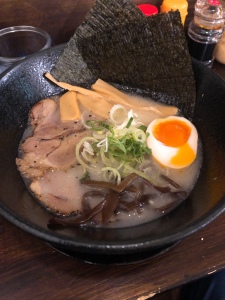 I’ve slurped noodles at Mr Ramen San four times during two consecutive visits to Melbourne. On my first trip my first two bowls were the charsu with tonkotsu as this would be a do or die bowl for Mr Ramen San. The result is that I’m heavily addicted to it (and Roystan-san didn’t need to commit sepukku). The bowl featured large and tender pork slices that sat on thin and firm noodles surrounded by a perfect ajitsuke tamago egg, two sheets of nori, slices of kikurage (wood fungus) and menma (bamboo shoot), topped with chopped leek and spring onion. The hero is the soup, a wonderful milky pork broth that has a silky collagen mouthfeel. It was simple elegance.

My next visit to Melbourne had me torn – would I feed my charsu tonkotsu addiction or sample something else? As Roystan-san concentrates on perfecting ramen what did I have to fear? I ordered the charsu with spicy tonkotsu. This bowl features all the toppings as the classic charsu tonkotsu but with the addition of what was more than likely spicy miso. It was robust and welcoming – one of those ramen that would be perfect on a cold Melbourne day. I enjoyed it but the spicy flavour bomb that was added did mask the delicate elegance of the tonkotsu base – not in an abrupt way, but once you have savoured the classic version (it’s just that good), you don’t need to add anything else. 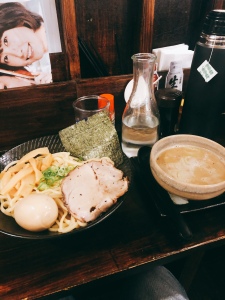 Fortunately for me (and Mr Ramen San), my flight back to Sydney was cancelled that night due to storms so I was able to make it back that evening to have the tsukemen.

Again I was in conflict – I’m always wary of tsukemen offerings when it is offered it has to be superior and never mediocre (like flying first class: you never want to go back to economy because you know how disappointing it will be) . The tsukemen was truly going to be Roystan-san’s greatest test.

For those not familiar with tsukemen it is a dish invented in the early 1960s in Tokyo by the staff at Taishoken owned by Kazuo Yamagishi who put it on the menu and made it famous (I made the pilgrimage to the original Taishoken this year). The dish is a serving of soup with cold noodles on the side which you dip into the broth. Once finished with the noodles you can ask for a lighter soup to add to the usually intensely pork/fish broth to drink. It’s an excellent summer alternative to ramen.

What intrigued me about Royston-san’s tsukemen was the addition of yuzu to the noodle. The set came out with a bowl featuring the yuzu handmade noodle, nori, charsu and whole ajitsuke tamago. The soup bowl contained a broth made with sardines and makeral containing small pieces of charsu. Also to the side was a flask of green tea. Royston-san explained to me that tea was to add to the soup after finishing the noodles. More intrigue.

The soup was superb: intense and rich with the combination of flavours melding into a fishy not too salty mouthful and coating the noodles well when dipped. The yuzu noodles, with their subtle citrus flavour, helped to mellow the broth’s impact. Genius. At the end you pour some of the green tea from the flask into the soup and another dimension to the broth is added. It adds a slight tannic sweetness – hard to describe – it needs to be experienced. Further genius.

After declaring to Roystan-san that he just served me what was the best tsukemen in my life I bade Mr Ramen San farewell with the promise I would be back in 30 minutes to have one last charsu tonkotsu before bed. Unfortunately I didn’t make it back – I got distracted drinking Dassai 50 sake up the road and chatting to another stranded Sydney-sider about our mutual love of ramen and swapping ramen stories from Japan and Australia. I may have broken that promise but I promise you this – Mr Ramen San is possibly Australia’s best ramen-ya.

PS: love the Mr Raman-san T-shirt the staff wear – they need to be sold to spread the love!

The verdict: No 1. ramen-ya in Australia and the best tsukemen on the planet. Mr Ramen San serves some very impressive bowls of Kyushu-style tonkotsu ramen that will absolutely delight hardened ramen fanatics.

This entry was posted in Uncategorized. Bookmark the permalink.