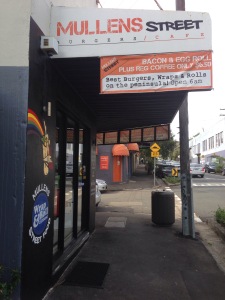 I HAVE been agonising as to whether I publish this post.

In mid December 2014 I was about to hit the button to introduce Mullens Street Burgers/Cafe to the world. The cafe is just a short walk from where I live but back in December I noticed the corner cafe has been closed for over a week. That didn’t seem too unusual as painters had been there the week before putting on some fresh paint inside and out – colourful cartoon murals now added some fun and gave the place an extra vibe. It also proudly sported the predominant colours of orange and black – the colours of the mighty Balmain Tigers as its owner, Marcello Biondi, was a huge Tigers fan (and everyone knew that).

Sprucing up a joint usually means business and life is positive and I wanted to get an updated photo of the new-look Mullens Street. As I approached the cafe it was unusually devoid of activity. I thought maybe it was closed maybe to get rid of that freshly-painted smell or Marcello was planning a grand re-opening for the start of summer and to launch the new look. As I approached I noticed bunches of fresh flowers outside the building –  almost always a sign of bad news. There was a note on the door – at the young age of 39, Marcello ‘Cello’ (as he was fondly called), had passed away and the cafe was closed until further notice.

Mullens Street Burgers/Cafe made one of the Peninsula’s best bacon and egg rolls. For $6 you got the roll and a damn decent espresso coffee. And you could get one from 6am. But it was Cello’s burgers that were the stand out – they were big, juicy and satisfying and they turned him into a local legend.

Back in December I wanted to tell you about Cello’s Tradie Burger – the best honest, hearty, manly burger in Sydney. Forget all those fancy ones out there – this was your proper old school fish ‘n’ chip shop style ones you used to get back in the 70s and 80s.

The Tradie Burger ($8) was the quintessential Aussie  burger – a seasoned flattened beef patty with bacon, lettuce, tomato, beetroot,  fried runny egg, fried caramelized onion and barbecue sauce – all on big a Tip Top hamburger roll. It was as tough, sunburnt, robust (and thick?) as any Aussie tradie (without the dust, sweat and stubbies).

Cello also did a mean pulled pork roll with chili slaw and other sensational burger and wrap creations. It was always difficult for customers to choose from the excellent Chicken Caesar wrap or the per-peri chicken one. The Tradie Burger was the pinnacle but also satisfying was the Big O Burger with huge onion rings and the Lamb Burger which had tender marinated lamb,  fried onions, roasted capsicums and aoli.

I have been hoping that Mullens Street would reopen – maybe by Cello’s staff or family to carry on his legacy, his humor and his spirit so that you too could share in the joy of having runny egg yolk and barbecue sauce running down your hand while getting your mouth around the Tradie Burger. Sadly it seems that it won’t be. I noticed a “For Lease” sign on the building the other day and that’s why I have finally decided to share Mullens Street with you and the tragic loss of another Balmain legend.

Sadly, Marcello has passed but long live his memory and that of his Tradie Burger.

The verdict: The Mullens Street Cafe boasted as having the best burgers and bacon and egg rolls on the Balmain Peninsula. It wasn’t wrong.