IT was wonderful to catch up and have a beer with Chloe again.

The last time I had a drink with her was back in 1989 in the Young & Jackson Hotel on Flinders Street in Melbourne. We haven’t spoken since but then again she doesn’t really say (or wear) much either. This time we were at Morrison Hotel in the inner-city Brisbane suburb of Woolloongabba. It was only by chance that I ran into Chloe. I was ordering a beer and as I turned to the left there she was, seductively avoiding my gaze and still wearing nothing. Most surprising of all she didn’t display any wear and tear since the past 24 years I last laid eyes on her either. Bitch.

Chloe is a painting by French artist Jules Lefebrve and is the pride and joy of the ALH Group (which retail giant Woolworths has a 75 per cent stake in), which owns the Young & Jackson Hotel (where Chloe has lived since 1909), and, as it turns out, now the Morrison as Chloe is apparently doing a tour of ALH Group pubs. 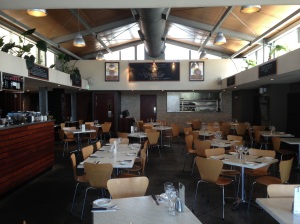 The pub’s restaurant is called Fiasco’s Steakhouse and obviously specialises in steak (carnivores welcome, vegetarians please don’t embarrass yourselves). You can dine outside under the veranda (which is perfect on a warm day but offers only a view of busy Stanley Road), or inside in a lovely atrium-style room which has a better decor than some restaurants.

I am now going to make a pretty big call here – The Morrison served the best steak I have had in a pub. Seriously. And it was less than $20 which included a beer and a Caesar salad and possibly the best damn mushroom sauce you have tried. Seriously.

I ordered the $19.95 lunch special which was a 300g piece of rump with a choice between a Caesar salad or house salad as well as either chips or a potato. You also can have a  sauce (mushroom, pepper, Dianne, chilli, Texas BBQ or herb butter), as well as a selection of mustard, and you also get a drink (a beer or glass of sparkling wine or red). The special was for a limited time – how limited, I’m not sure.

The steak was the main event. I ordered it medium and it was cooked to medium. It was tender, juicy and did indeed almost melt in the mouth. For the price it was a great piece of meat. I also saw two serves of rib-eye on the bone go past and these also were good-looking pieces of meat and from the reaction of the diners were well worth ordering.

The little Caesar salad on the plate was damn good – shredded cos lettuce tossed with crispy croutons, shaved parmesan cheeses and drizzled with an egg-based mayonnaise. I even found a whole anchovy in it. Perfect for the size.

An Australian steak needs big chips (none of those shoe-string fries that accompany petite French-inspired stuff), and the Morrison did not disappoint. They were chunky, beer-battered, crisp and tossed in a paprika-based dusting. There also was a slice of garlic bread.

I don’t usually order a mushroom sauce as I usually find them to be imitations – a blob of gravy with a couple of finely chopped mushrooms thrown in to add the word “mushroom” to the word “sauce”. But this sauce is apparently the talk of the town so I went for it. It sat in a separate small bowl which is a great first impression as I get sick and tired of ordering a steak only to find it drowning in the sauce of choice. It’s OK at home when you know how much you want but when cooked for you it is you who should decide where and how much is needed. The mushroom sauce was the best I have ever had in a pub. It was creamy and full of sliced mushrooms. The sauce was not separated and was infused with a beautiful earthy and sweet mushroom perfume. I literally scrapped every last micro litre from the bowl.

Satisfied? You bet ya. But it’s a pity I have to travel to Queensland to get a damn good piece of meat cooked for me.

The verdict: Queenslanders are proud of their cattle and love their steak and the Morrison does not let the State down. In my opinion it serves one of the best pub steaks in the country.