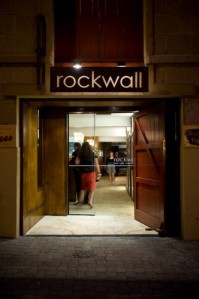 I WAS a bit apprehensive taking the princesses to Hobart’s Rockwall as it’s one of the more sophisticated Hobart eateries and knowing how excited and overwhelmed Miss Gob and the former Miss Pla (now known as DJ Hoot), can get when they dress up, I was prepared for an evening of glaring stares from diners, scowls and intimidation from staff, and endless complaints from the princesses that there wasn’t anything on the menu to their liking.

Baroness assured me that all would be OK as I pulled the car up in Salamanca to drop the three off in the chilling Tassie winter air at Rockwall’s entrance. When I followed five minutes later my anxiety turned to euphoria as I spotted them – not only did we get the best table in the house (in the back corner overlooking the famous view of the outside rockwall), but there were other formerly nervous adults with equally well-behaved children interspersed with tables of couples and friends scattered around the restaurant. Even the waiting staff were smiling when they came to attend to us. All signs of good things to come. 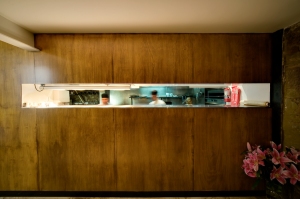 Rockwall Bar & Grill is within one of the majestic and refurbished sandstone Georgian warehouses in the historic Salamanca precinct and opened in late 2008 by local restaurateur Susan Catchpool and former Australian Rules footballer Garry Baker. The footy connection doesn’t stop there as Rockwall partners include former Toll transport supremo Paul Little (now Essendon Football Club Chairman), AFL living legend Ron Barrassi (who I have fond memories of pouring me a Cooper’s Pale Ale in his Mountain View Hill pub in Melbourne’s Richmond many years ago), and their mate Max Forster.

The restaurant is long, on the narrow side (yet spacious), with a modern design and contemporary wooden furniture (with a splashing of red booths around the space). All of this blends with restored riveted iron columns and beams and eroded, unrenovated sandstone walls. It’s a smart place (so we dressed accordingly) but neat casual diners would also be welcomed and would not be eyesores. Staff are charming and friendly, seem to enjoy working there and easily adapted when interacting with Gob and Hoot. They were even able to procure special requests from the kitchen for them. Nothing seemed to be of any trouble.

Rockwall’s menu is a showcase of Tasmanian-sourced produce and the prices are alarmingly moderate when compared to its restaurant peers of the same calibre on the mainland eastern capitals. There also is an extensive wine list concentrating on Tasmanian regions but there are some decent regional mainland and imported varietals. A few wines are available by the glass (from $7.50), so you can match a dish with a particular style. 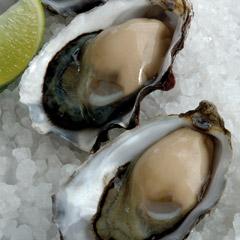 Baroness and I started with a glass each of the Josef Chromy spraking ($8.50) to accompany the Oyster Trifecta ($35), a mixed dozen of freshly-shucked Bruny Island oysters: natural with a mignonette dressing; Ponzu (soy and mirin); and the classic kilpatrick (crispy bacon and Worcestershire sauce). These were OMFG! oysters. They would have to be the best I have ever eaten. Creamy and succulent – all dressings did not overpower these triple A moluscs. By far the best were the natural with the mignonette dressing – so good were they that we ordered another six natural for $19. We also each ordered a Bloody Mary Oyster Shooter ($8) – strong and spicy in the Bloody Mary fashion with another excellent oyster contained in the glass.

Carnivores will not be disappointed at Rockwall. There is a choice of six different cuts of steak (from $28) which include a choice of sauces (peppercorn, mushroom, cabernet reduction, cafe de Paris butter or a selection of mustard and horseradish). If a steak isn’t in order then the mainly meat-dominated menu that evening included pork loin rack glazed with plum and tamarind on mash ($36); fish of the day (grilled or battered for $32); Tasmanian salmon with a creamy horseradish sauce and smashed potatoes and peas ($30) or grilled sausages ($26). Sides include Brussels sprouts with shallots and bacon; rocket, pear and Parmesan salad, a cos Caesar salad and roasted Huon Valley mushrooms (all $7).

The Baroness chose the twice-cooked duck ($38) which was a stack of crispy-skinned and tender duck fillets served with mash and greens on the plate. The duck was cooked perfectly having rose pink flesh under a layer of crispy skin. The orange and pepper sauce was an interesting and complimentary addition – almost a festive sauce to have for Christmas in July. It was a dish that would feel at home in Europe or Asia and if you are a duck lover give it a whirl.

Gob and Hoot thought the Rockwall Burger ($26) would be to their liking. Our waitress said it was a big meal but she would see if chef could prepare two scaled-down and cheaper versions – and he could. The burger was a nice piece of eye fillet with bacon, Swiss cheese, caramelised onion, fried egg and fries on the side. It came with a tomato relish (but the ever faithful supermarket tomato sauce was also made available). Gob (the fussiest of the two), ate everything on the plate. DJ Hoot (who has the appetite of an elephant) left a mouthful but both gave it the thumbs up. From what I tasted from Hoot’s leftovers it was indeed a decent burger – the meat was tender and the flavours all married. As a grown up it would be something I would probably have for lunch than dinner.

I ordered the specialty of the house – the Barsassi eye fillet steak ($38) which is a steak stuffed with blue cheese (I am assuming the blue cheese connection may be because of Ron’s association with the Carlton Blues or maybe it’s just because he is a fan of blue cheese. I didn’t ask). Let’s face it – cooking steak properly and to order is a skill and the chefs at Rockwall know how to cook one. It was magnificent – a huge, plump slab of eye fillet with creamy blue cheese in the centre that was dripping from within and smothering the side of the steak. It was cooked to order (medium rare), was rich and delectable, I could cut it without any effort, and was served with crispy roasted potatoes.

Gob and Hoot demanded a Nutella pizza from Cargo a few metres down from Rockwall so we forgo a choice of the desserts – warm fondant chocolate pudding; cookies and cream ice-cream; Turkish delight panna cotta; sticky date pudding or orange crème brulee (all $13). Unfortunately there was a one hour wait for food at Cargo so Gob and Hoot had to eat gelato  in close-to-freezing winter temperatures (but I am sure the Rockwall staff wouldn’t have minded us trudging back for that pudding).

Rockwall certainly surprised me in both food, service and attitude. And, Gob and DJ Hoot if you are reading this: bravo (hoot! hoot!).

The verdict: Serving good-sized portions and possibly the best oysters in the country, Rockwall offers excellent service with a mixture of contemporary dishes showcasing Tasmanian produce side-by-side with well-executed steaks from the grill. Princes and princesses welcome.