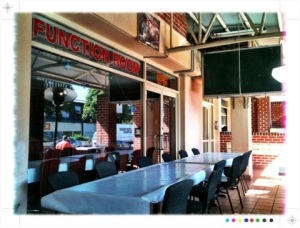 Unfortunately Jannai is no longer. In its place is curry restaurant Kammadhenu (which also has a branch in Newtown).

THE Deity had never been to Homebush but knew that it was somewhere near a complex of temples and shrines devoted to the sporting gods that came from across the planet to Sydney in the year 2000. Despite the lack of familiarity with this south-western Sydney suburb The Deity did expect some decent offerings as Homebush is home to a proportion of Sydney’s Indian and Sri Lankan communities.

Janani is housed at the bottom of some brick apartments on Burlington Road and it offers a Sri Lankan inspired menu with South Indian nuances. There are two areas – a small take-away room with a “pie warmer’ full of roti “rolls” stuffed with spiced potato; lamb or fish, as well as an assortment of snacks such as vada, samosa, pakora, and onion bhajji. Take-away orders from Jabai’s menu can also be made.

Then there’s a large indoor restaurant (with function room). The dining area isn’t striking unless glaring and colourful Bollywood MVs are playing on televisions. A bevy of fridges are stacked with Sri Lankan and Indian soft drinks (such as ‘Thums Up” cola and “Necto”), milk, water and other liquids.

Outside, tables line the stark veranda with Sri Lankan tourism posters fixed on the exposed brick support pillars and, yes, a TV (I’ve been to Janani before – a few summer’s ago – when the TVs are usually tuned into a cricket game. Thankfully cricket season was over or The Deity would have been fixated on it).

You could be forgiven into thinking you were in some Colombo street cafe – everything comes out on (or in) stainless steel: cutlery, drinking tumblers, plates, dishes and bowls. Service is casual.

The menu is extensive. There are varieties of naan and paratha (from $2); chapoori; chapatti; channa bhatura ($10); different varieties and styles of curry (seafood, lamb, goat and chicken), over 20 types of dosa (from $6.50); scotch eggs ($3); tandoori chicken and chicken tikka; biriyani, a choice of different thali; and street delights like samosa, vadai, idli, bhajji and hoppers. 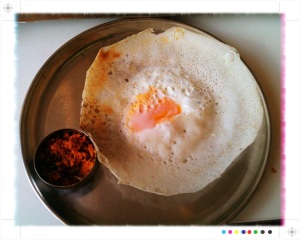 I haven’t had a hopper since a visit to Sri Lanka in the late 1990s. Hoppers (or appam) are a staple breakfast dish for Sri Lankans. A hopper is a bowl-shaped thin pancake made from fermented rice flour. At Jannai you can have it plain, with a fried egg (an egg hopper), a milk hopper (which has a spoonful of coconut cream in the centre) or a jaggery hopper which is cooked with palm sugar. Janani also has the marvellous string hoppers (noolputtu) –which are made from rice flour dough which is pushed through a string hopper press into a hopper mould and then gently steamed and used to mop up curry (these weren’t tried on the visit).

Tamil literature has mentioned Hindu deities being ritually offered appam for centuries. Based on this, I thought it essential to offer The Deity an egg hopper ($3.50) which came with a small dish of pol sambol (ground chilli, maldive fish and coconut). This was a perfectly cooked thin and light hopper with a nicely fried egg. The pancake had that slightly acidic and fermented sourness to it which then combined with the sweet and savoury flavours of the sambol and fried egg. I found it quite traditional however The Deity found the combination of sweet, sour and savoury not too divine. 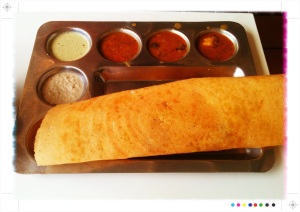 The Deity demanded a dosa – those wafer thin crepes made from fermented rice and lentil flour and making them properly is an art. The masala dosa ($8.50) was incredible – it seemed almost a metre long. This thin and crunchy crepe was neatly filled with a slightly spicy potato masala and served with sambar, raita (mint, carrot and coconut), and chutney. It’s always pleasing (and reassuring) to find a piece of cassia bark in a sambar (I know it’s made properly and with love)!

The Deity thought it was the best dosa ever (and The Diety is an expert on dosa). I had to agree – it wasn’t oily, there wasn’t too much potato masala in it to be overwhelming, and the five accompaniments were perfect matches. It was a star. 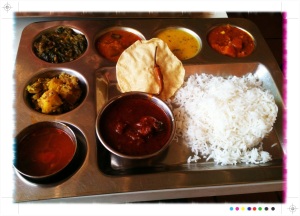 We just had to have a thali and the pick was the prawn thali ($14.50). It came on a stainless steel thali plate with rice, a poppadom, and six accompaniments (ranging from sambar, pickles, chutney and small serves of curry). The four prawns were in a rich, deeply-flavoured peppery curry sauce with hints of curry leaves, garlic, onion and coconut. The dish, despite there begin only four prawns it, was a more than adequate when taking into account all the accompaniments. The Deity and I had to fight over the remaining curry sauce – it was, quite simply, yummy.

Even though no garlands or incense awaited The Deity and I during the pilgrimage to Homebush (just the wafting scents of roasted cumin, mustard and curry leaves), Janani was able to offer extremely satisfying and well-priced Sri Lankan and southern Indian classics.

The verdict: Ignore the starkness of the place and just choose from an incredible list of flavorsome Sri-Lankan and South Indian foods. Simple, basic surroundings but the food is divine (and you can even take some Sri Lankan-inspired street morsels home with you).

Tip: Selva’s Spices is 50m down Burligton Road from Janani and there you will find all the Sri Lankan and sub-continant essentials including a fridge full or Sri Lankan soft drinks such as the famous bright crimson and cherry-flavoured “Necto” with the marketing tag that reads: “Necto explodes with giggles and great fun” . Warning: keep out of reach of children (and some grown ups). It’s crimson, fizzy and sweet. Say no more.