TO’S Malaysian Gourmet is hidden in an “passage” between Miller Street and a building in North Sydney (next to Dick Smith Electronics) and is a bit of a North Sydney institution.

Inside is a small area consisting of a stainless steel bench with stools, a few tables (and a few outside), with To’s offering a variety of quick Malaysian and Singaporean inspired dishes (including a bain-marie selection). To’s most popular offering is its chicken laksa. 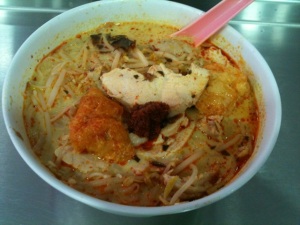 To’s chicken curry laksa ($8.20) is full of thin vermicelli noodles topped with chunks of chopped chicken (breast and thigh – some with the skin still on), a handful of bean sprouts, a couple of pieces of fried tofu and a dollop of sambal (more can be added, just ask). The toppings may be basic but the soup is not. By examining the oil and fried onion and the traces of the distinct taste of laksa leaf it seems a handmade paste has been used. It lacks some of the traditional ingredients such as candle nuts (and the soup is slightly pale) but it has some pungency but is not overpowering. The broth is a combination of coconut milk and chicken stock (it isn’t heavy and rich with the coconut milk) – and leaves a pleasant sweet/pungent mouthfeel that lasts. The sambal certainly gives a bit of extra dimension and tends to make the dish – without it it would be slightly lost.

From the constant shouts by the staff of the words: “chicken laksa!” there is no doubt that demand for this dish is high (and who was it that dared to order the nasi goreng and break up this cacophony?).

Update (March 2011): To’s is still popular with the lunch time crowd and it can be quite chaotic and frustrating when ordering and seeing the confusion and stress on the faces of staff. There is no order to the system and when it’s busy you can be battling with other customers for the dishes coming out – an ordered numbering system would be better and fairer so customers know when it is their laksa or chicken rice arriving (and not someone else’s order). Maybe To’s need a raffle ticket and call out the number when the order comes out like some food court outlets do?

Update (April 2011): Enough about To’s laksa – another typical Singaporean hawker-stall staple – prawn mee ($8.90) – is on the menu. It’s a beauty. Pork slices, what seemed to be an endless handful of prawns (about 10), and bean sprouts all a top of hokkien and vermicelli noodles immersed in a fresh and intense prawn-flavoured broth with a good whack of sambal flavour. After each mouthful a lanolin-like layer of broth sticks to the lips and mouth creating a warming flavour-packed punch that lasts and lasts. I actually prefer the prawn mee to To’s laksa.

It also seems that from observing a cut and paste job on To’s billboard menu there has been a recent price rise to some dishes. However, these prices seem to be compensated by To’s having a daily menu special which is a slightly discounted regular menu item.

Update (February 2012): To’s now has introduced an ordered ticket system so that customers no longer have to fight for their laksa. Prawn mee ($8) is still excellent.

Verdict: A good basic laksa style with the sambal saving it. A bit lean on the extras but it’s filling and pleasant with the soup leaving long-lasting, sweet and slightly pungent flavours on the palate. There is no a need to shove and be heard when ordering and snatch and grab when you think your dish is ready as quite wisely (were they listening to me?) To’s now gives you a ticket with your order. Prawn mee is true to form – a must try.