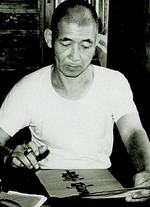 BACK in 1895, Tainan fisherman Hong Yu-tou decided to cook up his usual stewed minced pork flavoured with garlic, shallots and rock sugar. He then added this pork mixture to a fish-flavoured broth spiked with black vinegar and containing noodles and bean sprouts. Finally, topping it off with a prawn, he created one of the most famous dishes to originate from Taiwan – tan tsai mian (台南担仔麵), also known as “slack season noodles”.

The story goes that during the slack season for fishing (when typhoons were common and the sea too rough to go out on boats), Hong would ply the streets of Tainan, in southern Taiwan, using a shoulder pole to carry his urn to sell his noodle dish – hence the name tan tsai mian – which translates to “shoulder pole noodles”. So popular were Hong’s noodles that he gave up fishing and opened a restaurant in Tainan selling his addictive specialty. His noodles even inspired a poem by a local magistrate which revealed how one bowl had the mystical power to make the eater desire more.

Tan tsai mian has two main ingredients – a special recipe of stewed pork and the soup’s broth. The minced pork comes from pigs’ hind legs and is stir-fried with Taiwanese shallots, rock sugar and other spices and sauces, and then simmered for several hours until it becomes dark-coloured. The broth is made of prawn heads, mashed garlic, coriander and black vinegar. Oil noodles (made of wheat), are placed in a small bowl with the broth and this is then topped with the minced pork and a prawn.

Tan tsai mian is mainly a snack to have between lunch and dinner or to have as an entrée. But if you find a good one it is not unusual to order another bowl (hence why that Quing Dynasty magistrate believed the soup had special powers).

Hong’s Noodles (香港的麵條), in my favourite old Taipei neighbourhood of Guting (古亭), is one of a few branches in Taiwan – the first originating in Tainan. It also claims to be linked to Mr Hong (as does Tainan’s Tu Hsiao Yueh restaurant which also has branches throughout Taiwan but claims to have Mr Hong’s original iron pot from which he made his famous dish and therefore a stronger link to the creator).

Hong’s Noodles at Guting is popular with the locals as well as students from National Taiwan University (Taiwan’s most prestigious university), which is a 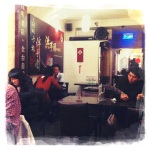 short walk away. It is in an area full of small Taiwanese restaurants specialising in anything from beef noodles and pig’s ears to pork rice but Hong’s stands out as a swankier spot serving delicacies from Taiwan’s south. It is a small restaurant (seating just over 30) with a long communal table in the centre which is next to a traditional cooking area where a chef is at work simmering the pork mince for the tan tsai mian. It does a good take-away trade and is also popular for its Taiwanese bubble teas. 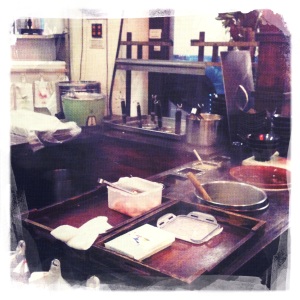 The menu typically features specialties from Tainan and you order by indicating how many portions you want from the menu items on a printed form and handing it to the cashier (as you do in most Taiwanese restaurants). Some of the highlights include crispy fired shrimp rolls; lu rou fan (stewed pork rice); and milk fish belly soup – a dish my mate and Taipei resident Kenny Chen graciously bought for me one night at Hong’s. Milk fish is popular in Taiwan. It is a succulent, tender and pearly-white fleshy (and bony) fish that apparently is raised in sea water and then allowed to fully develop in fresh water. Despite the good choice of southern offerings you can’t come to Hong’s without having the tan tsai mian (NT$40) and on the nights I was there it was what most people were having. 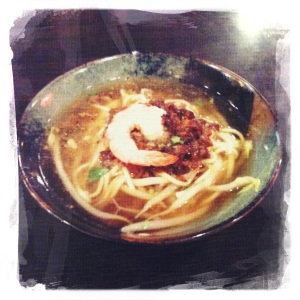 The tan tsai mian is true to Mr Hong’s style. It comes in a small ceramic bowl with a handful of oil noodles steeped in an aromatic and sweet prawn and fish broth topped with a spoonful of pork mince with a prawn on top and a few bean sprouts in the broth. Although it is a small (traditional) size, the separate components of broth and stewed pork mince, each with their distinctive flavours, harmoniously blend together. The pork is quite rich in flavour (having been stewed and reduced for so many hours). These flavours are off-set by the soup which sweet and light yet with a little bit of sharpness from the vinegar, which helps to soften the fat and richness of the pork, making it all an incredible tasty meal. Delicate in many ways, but packing a punch in another way.

The Taiwanese believe that tan tsai mian is a national treasure and Hong’s Noodles is a pleasant, homely local restaurant where you can savour a bowl (or two), enjoy some traditional southern Taiwanese snacks and mix with the Guting locals. And, if you yearn for tan tsai mian you can buy a tin of the special pork mince from Hong’s and take it home or make it from scratch by following a version of the recipe at the excellent Taiwanese food blog by EggWan at http://eggwansfoododyssey.com/2010/11/11/tan-tsai-noodles/

What: Hong’s Noodles, 32 TongAn Street, Guting, Taipei, Taiwan (it’s on the right on a corner of lane just before you come to TingZhou Road). Website:. www.hongs1895.com.tw/

The verdict: Whether or not Hong’s Noodles is directly linked to Mr Hong Yu-tou doesn’t matter. It’s a popular local haunt for Taipei’s Guting locals who earn for southern Taiwanese dishes in clean and friendly surroundings and makes damn fine tan tsai mian that I suspect Mr Hong would appreciate.